The village of Bellapais, (also known as Bellapaix or even sometimes Beylerberi), sits majestically on the slopes of the Kyrenia mountain range and can be reached from the eastern side of Kyrenia by turning right at the traffic lights and following signs for Doğanköy and Beylerbeyi.  It is about a 15 minute drive from Kyrenia.  You can’t really miss the village actually, given the sight of the glorious Bellapais Abbey sitting in the centre of it! 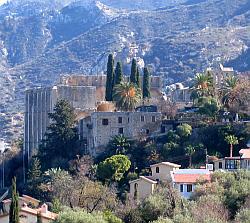 The outskirts of Bellapais are also home to the Early Bronze Age necropolis of Vounous, although this site has now been pilfered and robbed by many and is no longer really the experience it should be.

The ruins of Bellapais Abbey itself are of huge proportions and you can spend hours exploring and gazing at some of the truly magnificent remains of superb gothic architecture, all incredibly imposing on the eye.  Originally founded as the Abbaye de la Paix in around 1200 by Aimery de Lusignan for the use of Augustine monks who had been forced to leave Jerusalem, it was also referred to in history as the White Abbey, possibly due to the fact that the monks who lived there all wore white habits.  It benefited from rich and influential benefactors such as King Hugues III, and grew considerably in size and importance.

This was however until the Genoese invaded in 1373 when it suffered terribly by being looted and robbed of its treasures – it was said that even part of the ‘true’ cross was taken.  From this time onwards the fortunes of the Abbey declined ever further with the Venetians sapping it of its prosperity for themselves, and it even morally declined too, being recorded that in the 16th century some monks took a wife (or even two!) with their offspring being the only ones allowed to enter novice monkhood.

Once the Ottomans had invaded in 1570 the Abbey was left to decay even further, with much of its stonework being used to build up the surrounding areas and villages.  There is sadly not much evidence of what happened to the monks (and their wives!), but it is likely that they would have integrated into the communities that grew after the Ottomans arrived on the island.   Despite its decline, The Abbey still retains much of its charm, and enough of its structure remains so that even today there are still examples of architecture from the 13th century, such as the church built in Frankish Gothic style with some wonderful frescoes and the nave, as well as 14th century cloisters, and a superbly carved sarcophagus dating back to around 2AD, amongst much more of interest.

The ruins are a stupendous testament to history and one of its main features is the refectory which sits on the edge of the cliff overlooking the sea to the north – and above its entrance is a marble lintel bearing the carving of the arms of Jerusalem, the Lusignans and Cyprus.  Under British Rule this huge 27 metre long refectory was used as a rifle range, although somewhat surprisingly it remains intact!  Anyway, we shall not divulge all of its mystical charms, as you no doubt will want to visit yourselves!  Opening hours are usually 9am-7pm daily from June until mid-September and 9am-5pm daily from mid-September until May.

All around the Abbey there are wonderful sights to see, and due to its size, the wonderfully tended gardens, and its superb position offering views to the east and west you can spend many an hour at the Abbey before looking at your watch!  Outside of the Abbey itself there are plenty of places to have lunch or refreshments, and walking around the surrounding village you will see both modern and historical buildings of interest.

Today Bellapais is a busy village or small town with plenty of tourist groups and individuals making the journey up the mountain to visit this beautiful and enchanting place.  You can also attend one of the many musical events held at the Abbey during the festival season, although perhaps there is something to be listened to in the concerns expressed by some about the preservation of this monument and the damage that noise may do to its structures. 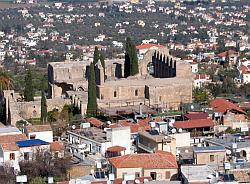 There are plenty of walking tracks leading from the village, so if you are in the mood for some exploring around the area then there is plenty to do, although it would be wise to have your bearings as there is opportunity for getting lost!  Bellapais is also well known for its wonderful little boutique hotels too, making it an excellent place to spend an affordable and rewarding holiday!

One remaining point of interest is that writer and novelist Lawrence Durrell lived in Bellapais from 1953-1955, writing his well-known book ‘Bitter Lemons of Cyprus’ and also his novel ‘Justine’ during this time.  Durrell describes his wonder at his first sighting of the Abbey and its history in detail several times in the book, and tells the humorous tale of the famous Tree of Idleness, which apparently made the person who sat underneath its branches extremely lazy! 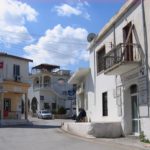 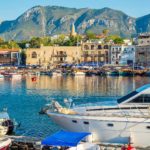