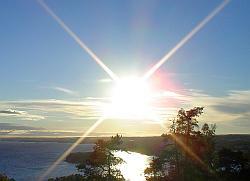 The climate is described as “intense Mediterranean” in North Cyprus – this means that in general the island enjoys short mild and temperate winters and very long hot summers.  Temperatures and rainfall vary depending on the elevation – naturally enough it can feel a lot cooler at the top of St Hilarion or Buffavento Castle than it does on the harbour in Kyrenia on the same summer’s day!

The summer can begin as early as March…though officially it doesn’t start until June, but by then temperatures are already in the 30s (around 86F).  From June to September there is no rain, the days are long and hot, the evenings are balmy and relaxing – though the nights can sometimes be a little uncomfortable – a fan or an air-conditioning unit soon stifle the night-time heat and allow for restful sleep.

In 2005 the central bank and the government in Turkey knocked off a handful of zeros from their currency and today the currency in both Northern Cyprus and Turkey is the yeni, (new), Turkish lira.

The economy in North Cyprus is severely hampered by its continuing isolation and the embargoes placed upon it. It relies heavily on Turkey for economic and monetary support.

Educational standards in Northern Cyprus are relatively good, and there are many local crèches, kindergartens and primary schools. There are also local secondary schools, but these are only located in the main towns such as Kyrenia, Lefkoşa and Famagusta.

Cyprus is the third largest island in the Mediterranean Sea, and Northern Cyprus lies directly 70 km south of the Turkish mainland. Its neighbours include Egypt, Lebanon, Syria, Israel and Greece.

On Sunday the 19th of April 2009, around 160,000 voters went to the polls in North Cyprus to elect their chosen government. After nearly 5 years in power, CTP (Republican Turkish Party) were ousted in favour of UBP (National Unity Party).