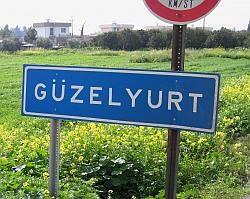 Güzelyurt is almost the last major town on North Cyprus’s north west coast – although Lefke sits slightly further west and inland.  You will also find Güzelyurt referred to as Morphou, which is the Greek name for the town.  The translation of Güzelyurt depends on the sources you read and the people you speak to, but it basically means ‘beautiful native country’ or ‘fatherland’ – while neither is a perfect literal translation, both meanings get right to heart of the matter and that is that Güzelyurt and the surrounding villages in North West Cyprus are stunningly beautiful, rich and fertile.

Güzelyurt is said to have been inhabited since Bronze Age times, and it was also a major centre for copper mining during its history.  Today, it is more commonly associated with being the citrus growing centre of North Cyprus.  Under the British rule the town was also a major part of the transportation network, it was connected by rail to Lefkoşa and Famagusta  mainly for transporting of copper.

Çamlibel (pronounced Chamlibell) is located inland on the western side of North Cyprus, around 15 miles from the harbour town of Kyrenia.

The town of Lefke, located inland just to the south of Güzelyurt, has a bright past and was one of the few towns to have seemingly been valued enough during Ottoman times to have warranted investment and infrastructure development.

Koruçam, (pronounced Korucham), or Kormacit in North Cyprus is located in the Güzelyurt region on the north west coast of the island and it lies slightly inland in between the villages of Kayalar and Çamlıbel. It is mainly a Maronite settlement with people from the Greek Orthodox Christian faith making up the majority of the population.