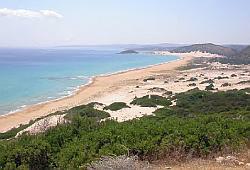 The Karpaz peninsula is located on the far eastern stretch of North Cyprus, and it stretches right up to the tip of the peninsula, it’s often referred to as the ‘panhandle.’  You may even hear or see the peninsula being called Karpasia, Karpas, Kirpasha, Carpasia or Dipkarpaz – in fact Dipkarpaz is a present day town, and Carpasia was the ancient city where the ruin of Ayios Philon stands.  It was once a very densely populated area during both the Roman and Luisignan times, but now it is far less so.

The Karpaz peninsula has some breathtaking beaches, wonderful walks and is littered with ancient churches, monuments, remains and ruins.  Part of the area is also now a designated National Park, where feral donkeys are allowed to roam free and nature is pretty much left alone.  The Karpaz is also largely an agricultural area producing crops, and you will find that most local inhabitants have animals and land, but tourism also obviously plays a large part in the economy too.

The village of Büuyükkonuk, (formerly Komi Kebir), in North Cyprus is located in the lowland foothills of the Beşparmak mountain range on the far east of the island. It’s situated about 6km north-east of Boğaz, just before the start of the Karpaz Peninsula region.

If you are on your travels around the Karpaz region of North Cyprus, then why not take the time to visit the village of Dipkarpaz (called Rizokarpaso by Greek Cypriots).