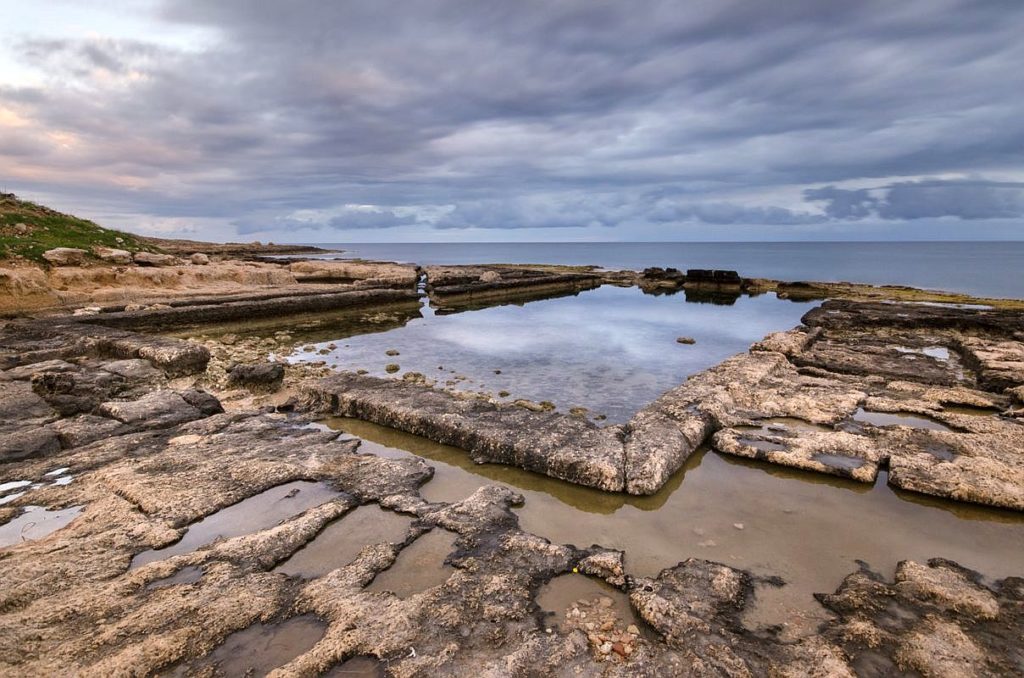 You can find the ruins of Lambousa by taking the main coastal road from Kyrenia to the west towards Lapta, and upon seeing the signs for the now closed Mare Monte hotel, (apparently it’s a designated site for the next mass hotel tourism project), turn right down towards the coast.  At the time of visiting there was a man in a little security hut at the bottom of this road, but we just parked up nearby, turned left and walked across the field to get to the site.

The city of Lambousa’s history is fascinating to say the least, and it has plenty of myths and legends attached to it, but it 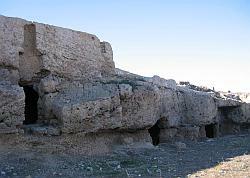 is also factually rich in interest too.  Quite a bit is known about its history, and even though there are some differing accounts of certain aspects of the site for example, it is believed to have been one of the nine Cypriot kingdoms and became a prosperous centre for sea-farers and traders.  It is known to have been inhabited since 1,000 BC due to the traces of Greek and Phoenician settlements found during excavations.

The kingdom played perhaps an even more important time in history when the incumbent Lambousa king aided Alexander the Great during his siege of Tyre.  He sent ships to help and was rewarded when the Persians left Cyprus.  Lambousa then went on to become an important commercial area due to its favoured harbour location and was involved in the processing of all important copper for which Cyprus was revered. 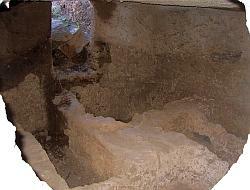 As with all periods in its history and because of its strategic and geographic importance, Cyprus was inevitably targeted by raiders with Lambousa under constant harassment by the Arabs for example, until it was finally defeated in the 7th century.  The residents of Lambousa were subsequently forced to flee higher up the mountains and away from the coastline.  However, before their departure, legend has is that the population buried their valuables and treasure within the city itself, in the hope that they would one day be able to return and rebuild their homes.  It wasn’t until around 965 that the Arabs were finally defeated, and it would seem that the population founded what it is now known as Lapta located further inland and did not return to rebuild the coastal city.

There have since been two separate excavations of Lambousa which have attested to the historical and legendary aspect of this site.  In the early 19th century a mix of decorative silverware, utensils and well preserved hand painted pottery were found by archaeologists and so called treasure-hunters.  It was a superb find with many of the pieces bearing the Byzantine Imperial Stamp which means that they could have come from Constantinople, then capital of the Byzantine 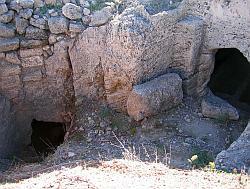 Empire, and you can still see these relics in the British Museum in London.  Further finds in 1902 by two Greek Cypriot stonemasons who were working on a house nearby revealed a stash of gold jewellery and silver plates.  Unfortunately the pair did not reveal their find and proceeded to smuggle it out of Cyprus where it was sold on to museums in America, London and Paris.  Some of it however was rescued and can now be seen in the Cyprus Museum in the south of the island.  All of these finds give a definite indication of Lambousa’s prosperity and that its population was well educated, developed and refined for their time.

Since the Turkish army have finally vacated most of this site it is now possible to see much more than in years gone by.  Although sadly, despite efforts by the Department of Antiquities and archaeologists from Germany, it does suffer from deterioration due to the 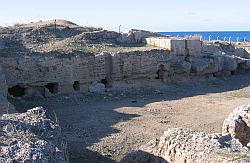 elements, and the area has suffered from fly tipping in recent years and is still home to a farmer and his sheep – although apparently there are plans to move his farm.  We feel it prudent to mention this as it would be unkind to praise the spectacular and fascinating nature of the site without mentioning the reality too!  However, try to ignore this as the site is open for all to see and explore and it’s certainly well worth it.

On arriving at the headland you will find the remains of the Lambousa tombs or graves, some of which have been opened so that you can wander inside them quite freely.  Once covered by earth all they would have revealed were hilly lumps, and to the untrained eye would not have really been perceived to be anything but.  All these tombs were carved from the rock by hand and although the rock is pretty soft, you can imagine the work that would have gone into producing so many tombs, a lot of which are still covered to this day.

A maze of tombs can be seen, some low lying under the ground with others located on top of them, some with additional chambers perhaps for a whole family as well as some probably for children as they are quite small.  Although very faint

you can still some remains of the frescoes that were probably painted in honour to the departed within the tombs themselves.  The site itself is huge and it’s impossible to tell how many tombs there actually are, but given it was a city there must be hundreds maybe even thousands.

Walking across the headland you can find what the majority believe to be a fish tank, however there have been claims that perhaps this was a Roman bath which would have been used for bathing – although we would prefer to think that it was used by hardworking fishermen rather than bathers!  It is a testament to hard labour and skills whatever the true story, as at 27 x 14 metres it would have taken hard work to create it!  The main fish tank would have been used to store the fish with channels and inlets feeding the tank with clean water via sluice gates to change the water periodically, to keep the fish fresh until ready to be eaten or sold.  You can still see pretty much all of this structure to this day, and if you think about it it’s a great example of engineering capabilities during this time.

Walking further across the headland we were amazed to find ourselves walking across a small mosaic path – thousands of years old – it seemed more than slightly amiss that this has not been protected in any way!  You can also look down to 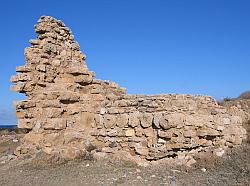 the sea where you will still see the remains of the city and steps which must have led down to the boats and ships below.   Continuing along the headland you will finally come to the Camelot Beach Club where, perhaps bizarrely, you can see what is believed to have been the entrance to the city itself.  A ruin now, but it would once have been a huge structure – you can see the rounded columns within the ruin which were perhaps taken from other places when Lambousa was being constructed.

We enjoyed our trip to Lambousa immensely – a huge piece of world history located on this island, which should be preserved for future generations to see.  We highly recommend you visit if you have the opportunity. 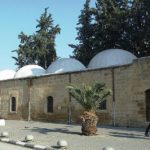 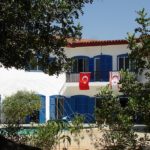