Koruçam, (pronounced Korucham), or Kormacit in North Cyprus is located in the Güzelyurt region on the north west coast of the island and it lies slightly inland in between the villages of Kayalar and Çamlıbel.  It is mainly a Maronite settlement with people from the Greek Orthodox Christian faith making up the majority of the population.  Koruçam seems to sit in a basin, so a short walk above the town will give a good view of the surrounding areas, and you can also see out to sea. 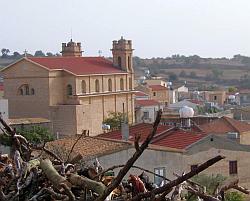 The Maronite community was said to have originated after settlers arrived from Lebanon and Syria around 1200 years ago.  They have strived to remain separate from the problems between Greek and Turkish Cypriots, and have been allowed to stay within the village as well as having access across to the south for business and educational purposes since 1974.

It would seem that nowadays however, some homes are just used as weekend retreats by some families who prefer to live in the south of the island, and there are not many of the younger generation to be seen in the village; they prefer to seek employment and live in the south too.  The local residents of seem mainly to make their living from agriculture and animal farming, and do business both with the Greek and Turkish Cypriots alike.

In more recent years their dialect has also changed from the old Arabic dialect, and now if you visit this area you will hear mainly Greek and Turkish as well some English spoken. 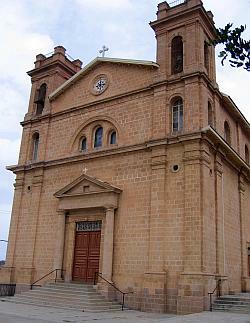 The centre of Koruçam features a huge cathedral like Maronite church called Ayios Georgias which was built in 1940, and although it is grand it does not really have much in the way of architectural interest.  You will also find a small and pretty convent church built in the 15th century which is located in the centre of the village.  You can ask for it to be opened if there is anyone around to assist you, and inside you will find a tidy if a little weary interior which features an alter and Virgin Mary statue.

Located on the coast is an area known as Cape Koruçam or Koruçam Burnu.  This area was once occupied by the military but they have now departed, and the public can enjoy walking out to the rocky point which is home to various plants and wildlife.

Koruçam is definitely worth a visit, and with the journey time it would also be worth stopping for lunch at one of the local restaurants such as the Yorgo Restaurant, a busy place full of locals and visitors alike, which is opposite the Ayios Georgias church.  Try their set menu which offers a range of tasty mezes and their speciality, Kleftiko!