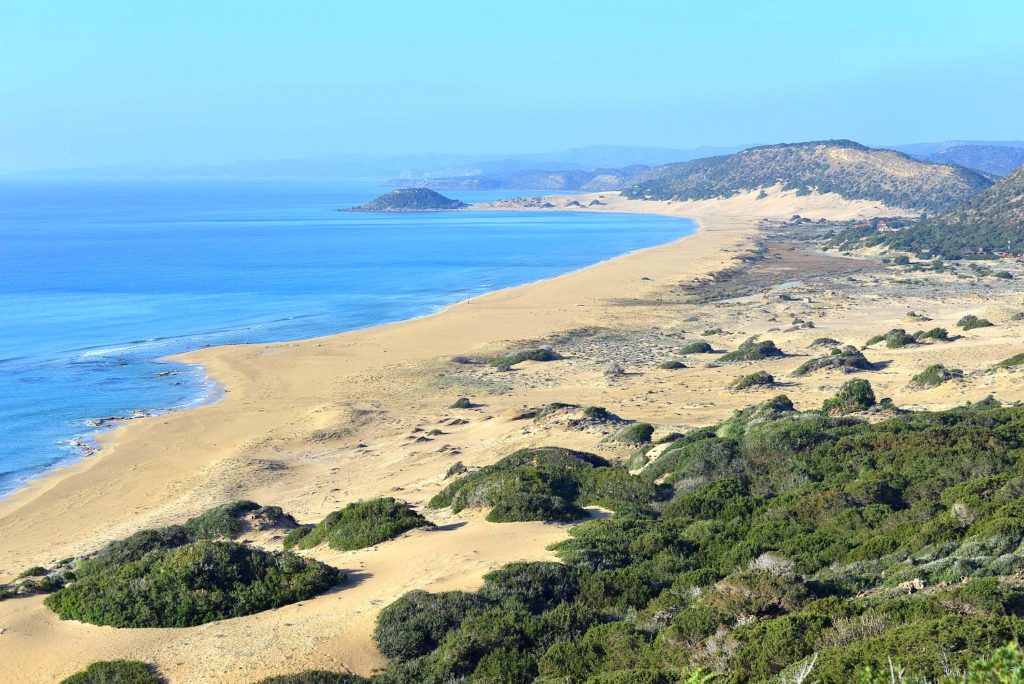 The Karpaz Peninsula is one of the last remaining true sanctuaries of peace and calm, it’s a place littered with historical sites and stunning views where everyone should visit at some point whilst on the island of Cyprus.

To get to the Karpaz you can go either via Famagusta on the south-east coast and turn inland heading north, or you can now take the coastal road via Esentepe and Tatlısu where a new road has been constructed over the last few years.

Travelling from the Famagusta side, the first place of interest you will come across is the Panayia Kanakaria, a small domed monastery church built around 1160 located just outside the village of Ziyamet.  A myth in past times describes the mosaic terrace as being able to cure skin diseases so it has suffered much damage and wear over the years, and there is evidence that a Byzantine settlement was here too.  Much has been stolen from this site and remnants were found as far away as America, although the Greek Cypriot authorities have now successfully reclaimed them.

The village of Sipahi, north east of Yesilköy is home to Ayias Trias, an early Christian basilica which originally had three naves and a baptistery.  You can still see some of the colourful 6th century mosaics, one of which features a pair of sandals which would have indicated a sign of pilgrimage.

Close by is the church of Ayios Thyrsos, built in the 15th century it has no particular features which stand out, but close by is another medieval chapel with traces of frescoes, and a small cave church which is probably Byzantine – it’s a site worth stopping to explore.

Further south in the village of Kurouva is the site of an ancient Middle Bronze Age fortress known as Nitovikla, which stands dominantly on a cliff overlooking the sea, sadly now it’s just ruins.  It is rectangular in shape and was thought to have been based on an Anatolian or Syrian design and would have been used to defend the city of Karpasia from sea faring invaders.

On the northern coastal road and past Yeni Erenköy you will come across the Theresa Hotel complex.  Just before reaching here, if you turn inland there are apparently two worn down statues and some tombs which have long been pillaged.  At the time of writing we have not yet investigated their whereabouts though.  Opposite the hotel and down a track road is a ruin of a small Byzantine settlement including a domed structure, water system and tombs.

Continuing on the coastal road you will reach the church of Ayios Philon, a church built in the 11th century and the last remaining structure from the Phoenician ancient city of Karpasia, believed to have been later destroyed by the Saracens.  Built with remains of the city in remembrance to Saint Philon who converted the local population to Christianity, the church still has some remnants of frescoes, and remains of the ancient harbour can be found whilst snorkelling in the area.

Turning south and inland you will find the large village of Dipkarpaz and be able to see the contrast that dots the region, with the silver domed Yeni Cami mosque neighbour to the exquisite 12th century church of Ayios Synesios.  Added to in the 18th century, it was originally used by the Lusignans and Venetians as a cathedral.

Again travelling eastwards along the coast you come to Aphendrika, believed to again have been an important city in Cyprus around 200BC.  Remains of three churches are still visible here, Panayia Chrysiotissa is the biggest and it was built in the 12th century, a domed Byzantine church called Ayios Georgios, and another smaller church called Panayia Asomatos.  West of here are numerous tombs of an ancient necropolis with some still visible, and to the east a small citadel of which only the lower parts remain.

The last and most prominent site to see is the Monastery of Apostolos Andreas (St. Andrew), also known as the ‘Lourdes of Cyprus,’ which can be arrived at via the coastal road to the top of the peninsula.  In recent history pilgrims still visited this monastery in their hordes until 1974.  Famous for its ability to apparently perform miricales, the monastery is still used for religious celebrations by the Greek Orthodox community, but is also respected by Muslims too.  The main church dates from around 1740, whilst nearer to the sea is the original 15th century gothic chapel which is now in decay.

Heading north-east towards the headland you will come to the cape of Zafer Burnu, on which the site of Kastros stands.  This appears to have been one of the earliest settlements on the island and was probably built around 700BC according to excavation results from 1973.  A temple of Aphrodite is said to have stood here, but it was dismantled and reused when the monastery was built.  An interesting fact – when standing on the tip of the cape you are standing only 60 miles from Syria.

Don’t forget to visit Büyükkonuk on your travels too, a designated eco-tourism village where efforts are being made to revive a traditional way of living amongst its community.  Particular places of interest here are the church of Ayios Auxentios which at the time of writing is undergoing restoration, and also a nearby cave which was home to a German soldier who became a hermit and is now buried in a chamber in the roof of the church!

That completes our review of the places of interest in the Karpaz region; however you will see many more churches and ruins everywhere!  Please click any of the links within the article to find out more about a particular item, or visit our other articles detailing places of interest to the west of Kyrenia, to the east of Kyrenia, in Kyrenia, Lefkoşa and Famagusta.