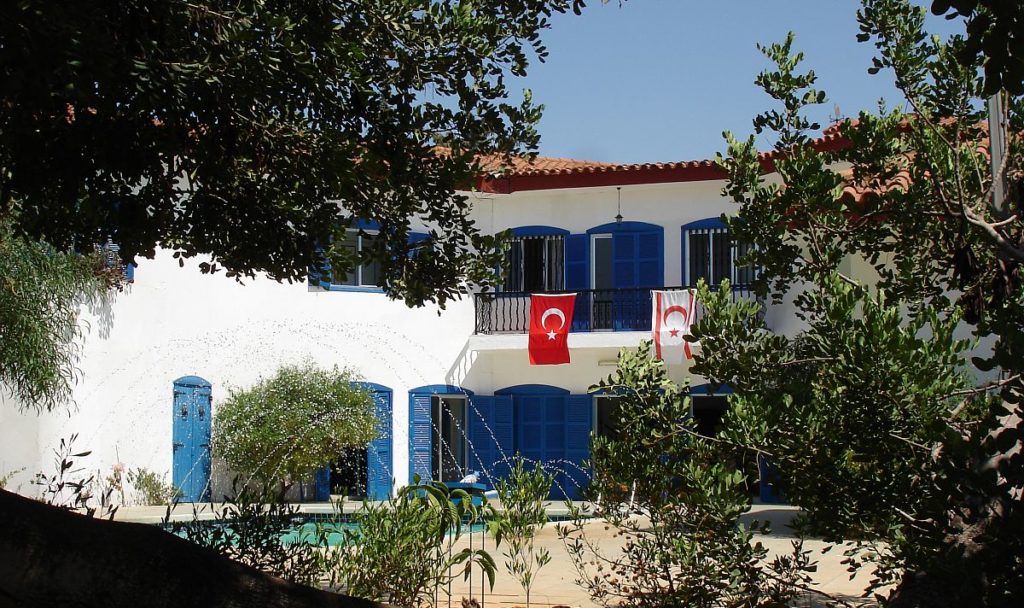 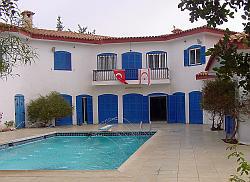 The Mavi Köşk is an almost secretive place that we had been seeing the odd snippet about in the press for ages.  It’s a place hidden away in an army camp belonging to the Turkish Peace Forces and located out towards Güzelyurt.  There is not much to read about it officially to be honest, so we thought we would go and see if we could expand on that which has been written a bit!  Now we can safely say, if you are looking to have a day out in North Cyprus then we would recommend you go and see it, it’s fascinating.

To get to Mavi Köşk, take the coastal road out to the west, working your way up through the landscape continuing towards Camlibel where you will see signs to turn right for Guzelyurt, Çamlibel and Mavi Köşk.  From here it’s not far and is signposted well for visitors.  You then turn 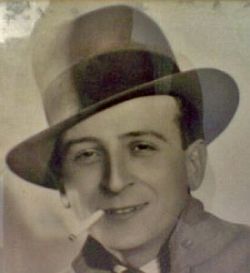 up a long country lane, at the end of which is an army post.  Here will need to leave a passport for security reasons and will be directed up to the Köşk itself.

It’s a called a Köşk, which in translation means a summerhouse, pavilion or chalet, and any of these words describes it perfectly.  (Mavi means blue.)  On arrival you can get an immediate sense of what the place used to be like, an elusive retreat and a summer party place basically!  The cost to enter is a paltry 2ytl at the time of writing and you will be given a guide by the staff so that you can walk around reading about what you see.  Just to mention quickly that it’s not spectacular like Bellapais Abbey, and nor is it a monumental structure like St Hilarion castle, but it does hold some very interesting tales from its past, and we actually felt strangely calm and reflective as we walked round this tranquil place. 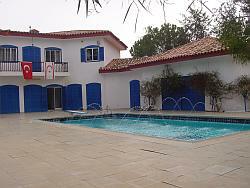 To begin with, the house has a chequered past and is most commonly known to have belonged to a gentleman by the name of Paulo Paolides (or sometimes Pavlides), a Greek of Italian extraction.  We have tried to research him a bit more, but have only managed to find what is most commonly believed about him and that is that he was a gun smuggler, lawyer to Archbishop Makarios, who was President in Cyprus after Britain signed away Cyprus in 1960, and also an ex-landlord of some kind.  His alleged criminal activities also apparently involved relations with the Mafia as well as large weapons dealings with the Middle East.  It is said that members of the Mafia often visited Mavi Köşk and held meetings in its once sumptuous dining hall.

However, some say that the house did not actually belong to him at all, and that its real owner was George Paraskevayidis, a very rich man who owned a highly successful construction company (41st in the world apparently) called Joannu & Paraskevayidis.  There are said to be two identical properties built by him in the south’s Limasol area after the island’s division in 1974, but this has never really been confirmed. 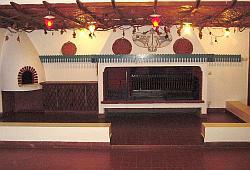 Mavi Köşk itself was built in 1957, it’s two stories high and consists of 16 rooms with well-tended grounds, all sitting on a plateau overlooking the Güzelyurt to Lefkoşa mountain road.  Part of the property, which includes rooms for children (Paolides never married and never had children of his own, but was fond of them anyway) is actually ‘detached’ from the main structure and is apparently earthquake proof too.  At the time it was constructed, modern fittings such as central heating and air conditioning were included, which still work today we are told.  It may not appear modern at all really to us nowadays, but at the time it was built using the most up to date building techniques on offer, and it still does feel pretty special.  In fact, there are several secret tunnels leading from the house to a bunker where there would have been a car waiting to whisk the owner away in an emergency probably.

Its interior furnishings are also very interesting, with some probably very expensive pieces to see, including two English pianos which must be quite valuable, as well some original pieces from around the world including carved wo 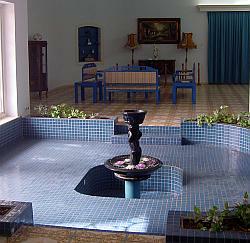 od chairs and tables, rosewood sideboards and various paintings for example.  One interesting piece is a custom-made drinks cabinet/bar which is covered in iguana skin!

One main argument for the property actually belonging to Paolides was that he used to import a special treatment cream for the iguana skin that made it change colour with temperature changes.  When he was forced to leave in the division in 1974, he continued to send the treatment cream for this cabinet (probably thinking that he would one day return here) up until his death in 1986, when it no longer arrived at the address.

Other rooms of note are the downstairs lounge/conservatory area where you will find a shallow indoor pool, which has the unusual name of the ‘Milk Bath’.  Legend has it that Paolides entertained lady friends by taking them for baths in milk, Sophia Loren being one of the better known guests to have apparently partaken of this activity, although no one but her knows that for sure!  There is also a lounge room which is said to have been used 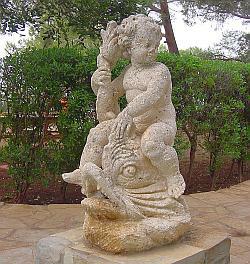 for Paolides’s meetings with his mafia chums – there is a picture here of a woman – although stupidly we didn’t take note of whether it was the Virgin Mary or an icon of some kind – whose eyes follow you around the room a bit like the Mona Lisa.

The gardens and land within the property have been well kept, if not slighty altered over the years, and are peaceful with only the outdoor pool interrupting the quiet with its once modern day fountain system gushing in the background.  There are some interesting little busts dotted around including a little boy riding a fish – which is also a fountain – as well as outhouses such as the barbeque and bar areas.  More of interest however is the fact that Paolides used to practice his lawyers speeches on the tip of the property which has the acoustics of an amphitheatre, and probably made him feel very important hearing his voice echoing around!

You can walk to the edge of the plateau to overlook the landscape and mountain road, with beautiful views to both east and west.  Sadly this view was said not to have just been used for pleasure, as there was once a bunker hou

sed here (you can still see the bunker with its little look out windows) which contained two heavy machine guns subsequently used to kill 150 Turkish soldiers caught with no shelter available whilst crossing the mountain road during the 1974 intervention.  The valley itself is now referred to as the Valley of Blood.

So all in all you can probably tell that Mavi Köşk is an interesting place to visit if you fancy a day out to the countryside.  We really enjoyed walking around and reading about its interesting, if not completely confirmed history – it makes for good story telling at least!  And it really does still retain the feeling that some very affluent and mysterious people stayed here with its peace and quiet probably one of its main attractions for these secretive people. 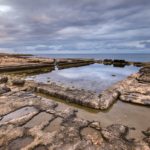