Ever fancied taking to the skies, floating on the thermals or just want to see a different view of North Cyprus than you have before?  Why not take the opportunity to try your hand at paragliding which has become the most exciting way to see the breathtaking views that the island has to offer!

The first and only company offering you the chance to drop off a cliff and float your way back down to terra firma whilst taking time to enjoy the scenery is Highline Paragliding, a very professional team of people who have years of experience under their belts.  Having spent several years operating paragliding companies in Turkey and New Zealand, the husband and wife run company have been offering paragliding in North Cyprus since 2003.

Not having partaken after six years of living in North Cyprus, this article has relied heavily on peoples experiences of their own flights, but we have to say that everyone we have spoken to has said that it’s an excellent activity to try, with initial feelings of wanting to run back to the car completely disappearing as soon as they have jumped and are in the air!  Most, however, specify that it would be sensible not to partake of a heavy lunch or too much liquid just in case you feel queasy pre-flight!  With a local resident Peggy McAlpine making the jump on her 100th birthday, this particular writer now feels a sissy for not doing it herself! 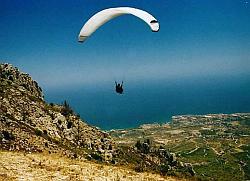 There are two main jump sites up in the Beşparmak mountain range that Highline use, and which one you jump from will be dependent on the weather conditions.  They have names too, Paradise and Baba (meaning ‘father’ in Turkish).  They are certainly high up at 2500ft and 2600ft respectively, which is probably why the highest has the imposing name of Baba!  Another possible jump is over the sand dunes of the Karpaz, which is a much gentler more low flying glide for those who prefer something which seems less scary!

The pilot will go through the necessary safety information, as well as filling you in on the best way to launch and land yourself safely. This seems to be what most people are worried about, but we have been told it is very simple and the landing is nothing more than making sure your legs are 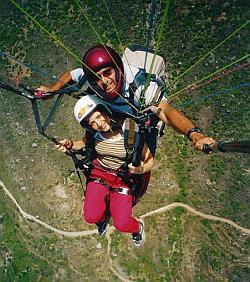 ready!  So, no worries there then!

In any case, you have no need to fear with the qualified and highly experienced pilots on hand, and unless you are an experienced pilot yourself, you will be strapped in tandem style with the pilot who does all the steering and encouraging for the whole journey.  People who have tried it have advised that you can go as slowly as you like to fully appreciate the stunning views, whilst those who have been more adventurous have asked for the final part of the descent to be more stimulating by picking up the thermals and doing a few spins before landing – if you are brave enough that is!

At the time of writing the price for a jump costs £59 which includes your flight, insurance and transport.  An additional 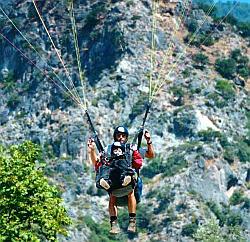 treat should you wish, is to have some photos taken of your jump, so remember to look like you are enjoying it even if you want to scream your head off!  This will cost you an extra £15 which includes between 12-15 photos and a video as well, which is put onto a cd for you.

If you want to treat a loved one to a jump, gift vouchers are available to buy from the Highline Paragliding office which is located in the old Kyrenia harbour.  As the vouchers are valid for one year, you have plenty of time to convince an unwilling recipient that it’s a great idea to jump off a mountain!

For those who want to have a picture taken of their house, business, golf course, or any other of the sights in North Cyprus, such as Hilarion Castle for example, then Highline also offer an aerial photography service too which has proved popular with businesses for example.  Just give 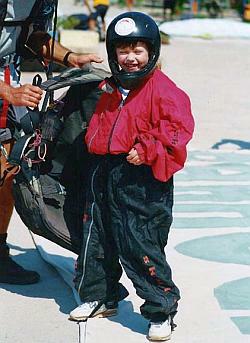 them a call if this is something that appeals and they can discuss it with you.

We hope we haven’t put you off (the writer of this article hasn’t got the guts to try it!), and for those who are petrified of heights then maybe its not the thing for you, but for those who want to try something a little different then go for it; we are reliably informed that it’s a great experience!  Check out the North Cyprus Highline Paragliding website for more information and contact details.

If you would like to know more about the various land activities in North Cyprus then please refer to our section which gives you plenty of ideas for things to do, or if you are more of a water babe then try our North Cyprus water activities section. 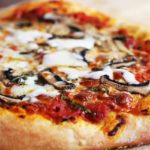 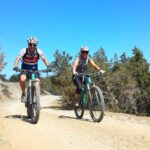