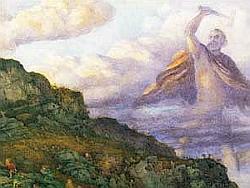 The island of Cyprus is well known for its history and for being steeped in myths and legends.  There are often  several different versions of a tale claiming to be the real story but the one thing they all have in common is that they are all fascinating to hear about!  There are several well known legends which we will give you an insight into, but there are plenty more than this so try and pick up as many as you can on your travels.

Hands That Made the Five Finger Mountains

There a few versions of this story, so just pick your favourite!  One legend has it that a particular hero of North Cyprus, Dhiyenis Akritas, leapt right across the sea from Anatolia to save the island from invading Saracens and when he landed his handprint was forever embedded in the soil and the Five Finger mountains formed from this hand print. 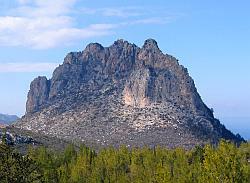 Another legend is that two young men fought over a lovely young maiden, with the winner to take her as his bride.  One man stabbed the other and was then chased into a swamp wherein he drowned.  The other also perished in the swamp as after having been stabbed he could not get out, but as he was the honest one of the two, he was immortalised in this tale.  As he drowned his hand rose up out of the swamp and remained there, turning to stone over time which then grew and became the Five Fingers we know today.

One more tells of one rather too hopeful young villager who fell in love with his local queen.  She obviously would have nothing to do with him and to get rid of him she told him to bring her water from St Andreas Monastery which was all the way out to the eastern end of the island.  After some weeks he indeed returned with water, but as she had not expected him to complete the task she was rather ticked off!  She would still not agree to marry him and so he lost his temper (probably quite a short temper with all that walking by this time!), and he threw the water to the ground, and grabbed a handful of mud from the puddle formed which he then threw at her!  She managed to duck the mud pie, but it stuck to the mountainside which then formed the Five Fingers, which are obviously supposed to be the imprints of his fingers in the mud!

Have you ever heard legends involving the taming of vicious animals?  Well this is a good one of those to hear about!

There was once a Christian by the name of Mamus who lived in Anatolia who was persecuted by the Romans for avoiding his taxes.  Whilst being taken to court to face trial he came across a huge lion that was in the process of attacking a sheep.  It is said that Mamus tamed the lion, rescuing the sheep from its fate, and then he subsequently rode the lion to court with little fluffy sheep tucked under his arm!  So impressed was the court judge that Mamus was freed from any punishment for his tax evasion!  The legend comes to Cyprus years later only because the sarcophagus of Mamus (he died roughly in 275AD) was found washed ashore on the island and the peasant who found it experienced a vision of where to bury the remains in the mountains and to have a monastery built there.  Ever since Mamus has been known as St. Mamus – Patron Saint of Tax Evaders!  You can still see the stone marker of St. Mamus astride his lion at the St. Mamus Monastery which is in Güzelyurt.

The Hermit of Hilarion

Being the sceptics that we are it’s hard to tell if this legend is based on any truth, but it is said that St. Hilarion Castle was the inspiration for Walt Disney in his castle design for the Snow White and the Seven Dwarfs movie.  However this is a more recent myth, and we much prefer the thousands of years old ones such as the following: – 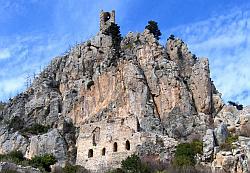 During the 7th century it is said that a holy hermit arrived on the island having fled Palestine, he apparently spent his time removing bad spirits and demons from the mountainside.  He was apparently stone deaf which is how he came to avoid the devils calling him!  The demons finally called it a day and left him in peace and he remained in the mountains until his death.  Years later it is then said that a Byzantine monastery and then a fort appeared from around his tomb, and this became known as St.Hilarion Castle.  As you walk around the castle it certainly does have a mythical feeling to it!

Another myth purports of a mystical treasure stashed in the 101st room of the castle, and if you find it and open the door you will be presented with great treasure within a magical garden.  Suffice to say we’ve tried to find it, many times, and of course failed miserably!

Glory of Gods and Goddesses

Cyprus is brimming with tales, legends and myths about the Olympian Gods such as Zeus, Apollo, Artemis, Poseidon and Aphrodite.  Aphrodite, the Goddess of love is supposed to have risen from the sea to the south-west of the island and proceeded to marry various other Gods such as Hephaestus, God of the forge.  But she also fell in love with the handsome Adonis and had an affair with Ares, God of war!  She must have taken some keeping up with!

One rather tragic legend is of a concubine who was housed at the conical dome which still sits in the waters of the old Kyrenia Harbour.  It was said to have at one time been the harem of the ruling king.  Black concubines were often kidnapped from their native Africa and sold to the kings for their pleasure.  One particular young man took a fancy to this particular dark and lovely concubine and they started to meet secretly within the castle.  She believed that if she became 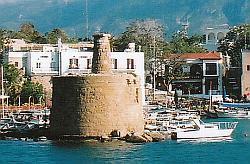 lighter in colour then the young man would be unable to hide his true love for her.  She prayed to the Gods and they answered her pleas by telling her to bathe in the waters of the cove behind the castle at night time and she would be granted her wish.

So, one night she threw herself into the water and did indeed turn a beautiful ivory colour.  However, the young man was upset at what she had done as he has preferred her dark skin and found himself another black girl instead!  So upset was she that she flung herself back into the water and drowned, and the cove has been known as ‘Black Girl Cove’ ever since.

We hope you’ve enjoyed our article on the myths and legends of North Cyprus.  We have found them interesting and as we said before, there are plenty more to tell and maybe even some new ones to add too! 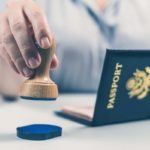 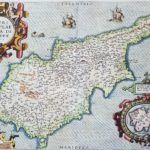