Some of the best beaches you will find in North Cyprus are to the east of Kyrenia, and if you’re not particularly interested in mingling with lots of other people then the further east you go, the quieter the beaches become!  In this article we will detail the main beaches along the coast up to the Karpaz and back down on the southern stretch through to Famagusta.

Heading out east from Kyrenia along the coast road (obviously!) you’ll come firstly to Diana Beach, (near to the Coca Cola plant), which has a small sandy beach and a café.  Not much further along is the local belediye plaj called Çatalköy Beach or Korfez Beach which has a café and water sports facilities, and is a very popular weekend family destination. Both have good stretches of nice sandy beach.

Via the same turnoff for Korfez you can also now reach the beach allocated to the Malpas Hotel, which is called the Conaro Beach Club & Restaurant, offering guests a rather swanky venue with a sandy stretch of beach, decked jetty and sunbathing areas with restaurant and bar facilities.  Offering a variety of water sports during the day, at night-time it becomes a popular club venue transforming itself into Club Mansion.

A bit further along the coast, just after you have turned off on to the Esentepe road, you’ll come to the Acapulco which is a large holiday resort complete with water slide park and very accessible family beach.  It has become an incredibly popular choice for families with children…the children can play all day while the parents can enjoy the bars and restaurants and child friendly atmosphere.

After Club Acapulco comes Lara Beach which is seemingly signposted down into the power plant!  Trust the sign and you’ll actually drive past the power plant and round to a pretty little beach which is very popular with expats.  The beach has a small cafe and very basic facilities, but it’s friendly and sheltered and a great place for swimming.

Another excellent beach location is Alagadi or Turtle Beach.  This is the next one along the eastern coast road and is actually two bays separated by a big sand dune.  The bays are home to nesting turtles and as a result they are protected, and you must be very careful to not leave rubbish on the beaches or stay later than 8pm after which time the turtles come to lay their nests during May to October.  You can always join a group to watch this spectacle via the Marine Conversation team, so please see our related article for more information.

Travelling further along the coastline where the road runs very close to the sea, you will see the various beaches heading out towards the Karpaz Peninsula, such as the areas at Kaplıca which have various facilities and in Yeni Erenköy there is a lovely little public beach.  You will also find that the small pensions and various little hotels located on the coast have their own areas of sandy beach for guest use such as the one at Balcı Plaza for example.

Coming back down to the south side of the Karpaz Peninsula on the way to Boğaz and Famagusta, you will find some of the most stunning beaches in North Cyprus.  Golden Sands is the most well known but still relatively quiet beach, seemingly going on for miles it is very popular with the more budget minded as it has accommodation right on the beach in the form of basic beach huts which are really cheap.

Continuing south you will find various other beaches popular as turtle nesting areas, with one aptly named Turtle Beach!  You will then come to the area of Bafra, the newly appointed touristic area for North Cyprus, where you will find the 5 star hotel Kaya Artemis, with others set to join it in the years to come.  They have their own beach area here, and guests can enjoy the hotel’s facilities for a fee.

Further south you will hit Boğaz, a quaint old fishing village, now a popular coastal area which has a variety of sandy beaches to enjoy via the hotels on the road through to Famagusta, such as the Boğaz Hotel, Merit Cyprus Gardens Hotel, the Paradise Resort, the huge 5 star Salamis Bay Conti, the bungalow complex of Kocareis and the smaller Mimoza Hotel.

Even further on down and into Famagusta and the area of Salamis you will come to the Park Hotel, it has a restaurant overlooking the beach, then onto the relatively new Venus Beach Residence which has very modern facilities. There is also the very popular Glapsides Public Beach area, which is extremely popular with locals and visitors alike, where you can relax with facilities such as bars and restaurants or partake of a few water sports.

The last beach, and maybe the most interesting, is the sandy strip located within the 5 Star Palm Beach Hotel complex.  It is a perfect place to while away the day with some stunning shoreline, and is often not too busy.  The interesting aspect to this beach is that it continues into the area of Varosha or Marash, now closed and forming part of the buffer zone with the south.  This area, now home to crumbling and decaying hotels, was once the most popular area of Cyprus for holidaymakers.

Please note: you will usually have to pay for access to beaches which have hotel, beach club and public facilities on them, and these days the cost differs between beaches, but you should expect to pay around 10-15ytl for the day.  However, it is also worth saying that no hotels or beach clubs are allowed to charge if you just want to have a swim and a sit on the sand as the beaches do not belong to them officially – just don’t sit on their sun loungers!

Also, there are no lifeguards or life rafts or sea patrols in North Cyprus, so be sensible about how far you swim out to sea.  With regard to nude sunbathing then we have to say that it’s not really the done thing in North Cyprus! Topless sunbathing is passable, but only in certain locations; however please remember that although North Cyprus is a secular country there are many that do practise the Muslim faith, therefore it is wise to be mindful of this and know that if you flaunt your body you could cause deep and serious offence! 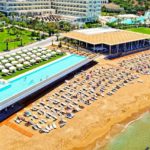 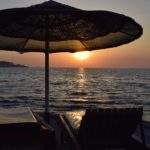